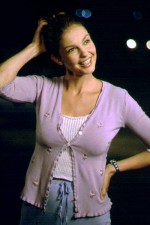 Cindy Pearlman has been talking with Ashley Judd about why she took on the role of 'Catwoman'.

"Now suddenly I am ready to try something more different," Judd says. "My inspiration as a superhero is that Catwoman is a very ambivalent character. There is a lot of fun to be had with this movie, as well as a great acting experience."

Its also been reported that screenwriter John Rogers ('American Outlaws) is currently writing the script for the film.

The following description by DC Comics describes the character of Selina Kyle (Catwoman):

Orphaned as a girl by a suicidal mother and an alcoholic father, Selina Kyle spent time in a state home for girls before escaping an abusive headmistress to live on the streets of Gotham City. Vowing never to go hungry or wanting again, Kyle used her natural acrobatic skills and keen wits to become the most accomplished thief Gotham has ever known — a cat who walks through walls and the hands of both Gotham's finest and the Dark Knight. Catwoman has no rap sheet and refuses to be caged by owner or government, settling into a comfortable life maintained by capers mostly of her own choosing. The Catwoman is no altruist, though she has fought the good fight on occasion and worked on the side of the angels. If she does the "right" thing, it is usually by her own design, and only if it suits her own whims or those of her purse strings. At least that's the story she's sticking to.

Thanks to 'John' for the description :)