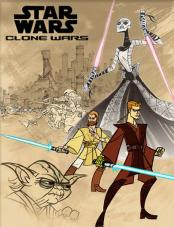 Cartoon Network and Lucasfilm Ltd. have announced their plans to create Star Wars: Clone Wars, a series of 20 animated shorts that will air on Cartoon Network in 2003-2004 between other programming.

Star Wars: Clone Wars continues the saga where the live action feature film Star Wars: Episode II Attack of the Clones left off - at the beginning of the Clone Wars, an epic civil war that pits the old Republic against a vast separatist movement led by the forces of evil.

Each episodic short will be two- to three-minutes in length and will air exclusively on Cartoon Network at regularly scheduled times during the network's regular programming beginning later this fall. Clone Wars will be produced at Cartoon Network Studios by a team led by Genndy Tartakovsky, the creator of Samurai Jack and Dexter's Laboratory.

As Clone Wars unfolds the valiant Jedi Knights lead the Republic's Clone Army against many new and ruthless adversaries across the galaxy. These new characters, epic battles and intricate stories will add an exciting new dimension to the Star Wars saga.

"We are incredibly excited to be working with Lucasfilm in creating an animated story that extends one of the world's most beloved entertainment properties," said Sam Register, senior vice president of development for Cartoon Network. "Cartoon Network's creative team will work hand-in-hand with Lucasfilm to make sure that our common vision for Clone Wars thrills Star Wars fans around the world."

"Genndy Tartakovsky and the team at Cartoon Network are tops in their field," said Howard Roffman, president of Lucas Licensing. "Their work on Samurai Jack shows that they can tell an epic story in a unique way, lavishing equal attention on dramatic battle scenes as well as the dramatic development of the characters."

More On 'Star Wars: Episode II - Attack of the Clones'...

E-Mail This Article » Share your comments on 'Star Wars: Episode II - Attack of the Clones'