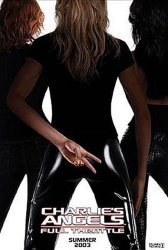 Synopsis: The Angels are ready to strike without warning and kick some serious butt as they go undercover to retrieve two missing silver bands. These are no ordinary wedding rings. They contain valuable encrypted information that reveals the new identities of every person in the federal Witness Protection Program. When witnesses start to turn up dead, only the Angels can stop the perpetrator, using their expertise as masters of disguise, espionage and martial arts. Good morning, Angels. Get ready to raise hell.

Linking the series to the movie...

Cameron Diaz in bikini and more...

Including some new stills...

The trio are back...

With the Angels and Mac...

Pink To Sing And Star In 'Charlies Angels' Sequel

She will sing the theme tune...

To be directed by McG...

Tyler Hoechlin talks on his part...

And other casting news...