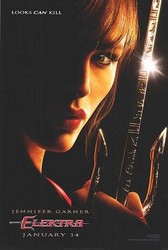 Synopsis: Follows Elektra Natchios, the beautiful but deadly assassin, who was trained by the Hand, a clan of mystical ninjas. When she turns her back on them, they want her dead.

Staying true to the comics...

Back in trademark red...

To star as male lead opposite Jennifer Garner...

More From Jennifer Garner On 'Elektra'

'Elektra' Gets Direction From Rob Bowman